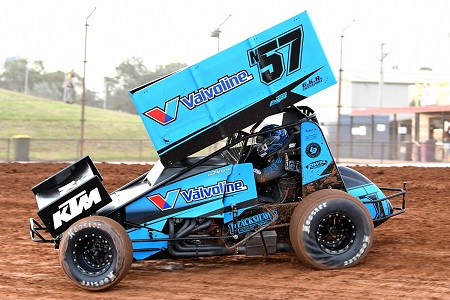 He hasn’t raced in Sydney since November, but that certainly didn’t hinder Matt Dumesny in any way, as he led all 30 laps of the feature race on Saturday night at Valvoline Raceway to record his second victory of the 2019-20 season.

On the mend after suffering a leg injury, which sidelined him all of the busy Christmas/New year period, Matt Dumesny showed everyone he has made a complete recovery, by putting on a dominating performance and raising his tally of career wins at Valvoline Raceway to six.

Starting the 30-lap feature race from the second row, Dumesny hit the lead immediately and despite a number of stoppages during the race, which bunched the field up, he was too strong on each subsequent restart, opening up a healthy advantage over the rest of the field and at the fall of the chequered flag, was over 1.6 seconds to the good over second place.

Crossing the line in the runner-up position was Robbie Farr. After a tough few weeks for Farr, it was good for him and the team to get a settling result and gain vital USC NSW points over current leader Marcus Dumesny. For Farr, he currently sits on 49 wins at Valvoline Raceway and no doubt, wold love nothing more than to rack up 50 wins before the season draws to a close.

Rounding out the podium was Jordyn Brazier who was locked in a great battle for the minor positions with eventual fourth placed finisher James Thompson in the early stages of the race before slipping back to fifth mid-race and managing to claw his way back with a pass on Thompson with only a handful of laps remaining.

Completing the top five was Thompson as mentioned and Daniel Cassidy who drove a great race and was locked in an intense battle with Daniel Sayre, swapping places numerous times before settling for fifth in sight of the chequers.

The B-Main was won by Cross ahead of Max Dumesny, Marcus Dumesny and Thomas.

The next event on the SANSW calendar is Saturday, March 14 for the next round of the Ultimate Sprintcar Championship. This was originally set down for an Old School Night, however with the recent washouts, this has been rescheduled to a full USC points-paying night.