SWEET RINGS IN THE NEW YEAR WITH A WIN 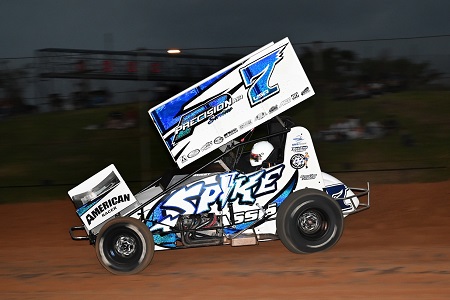 Brad Sweet once again showed why he is the current World of Outlaws Champion with a faultless drive to claim his third feature race victory of the Ultimate Sydney Speedweek and extend his points lead.

In what was yet another entertaining race, Sweet came from the third row to chase down leader Jamie Veal and add another Valvoline Raceway feature-race victory to his career. Sweet sat in third place for most of the race, sizing up his opposition before Veal slipped from the lead, which promoted Aaron Reutzel to the front and Sweet into second, when nine laps from home, Sweet made his move, hit the lead and was not challenged from that point, and raced away for the win.

Reutzel recorded his best result of the international season, coming home in second. Looking particularly strong all night, he fired a shot, which was very impressive, and it spells danger for the other teams, as it appears, he has hit his stride for the remaining shows on his schedule.

It’s hard to find more adjectives to describe third placed Marcus Dumesny’s season as he has consistently put in good results which in turn cements his lead in the Ultimate Sprintcar Championship NSW and puts him in good stead for a great result in the Ultimate Sydney Speedweek point score. Two thirds, a fourth and a sixth is a great result for the talented youngster.

Jamie Veal crossed the line in fourth after starting the feature race on pole and leading for 21 of the 35 laps. Veal looked the goods for his first feature-race win of the Sydney Speedweek but slipped back to the just outside the podium in the closing stages.

Carson Macedo rounded out the top five, after dominating the Speedcar feature, and starting on the seventh row of the feature race, he was sublime in heavy traffic and certainly turned around his misfortune of two nights earlier.

Sam Walsh was racy all night and was rewarded with a sixth-place finish ahead of Lynton Jeffrey, Robbie Farr, Jackson Delamont and Ben Atkinson finished 10th.

Max Dumesny was victorious in the B-Main ahead of Ferguson, Cassidy and Jeffrey.

Teams will be back on track in the penultimate round of the Ultimate Sydney Speedweek this Saturday, January 4.