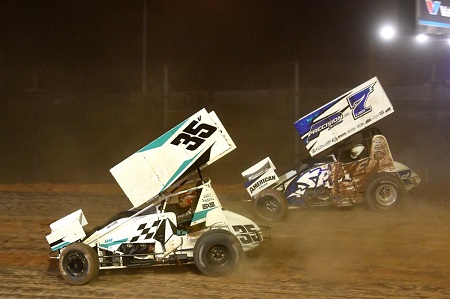 If there’s one thing that we have learnt during the first two nights of the Ultimate Sydney Speedweek, it’s that Brad Sweet knows how to win at Valvoline Raceway, as he repeated his Boxing Day Australian Grand Prix win.

Sweet, coming from the third row in the field, was locked in a great battle with eventual second-place finisher Jamie Veal with the lead swapping on many occasions throughout the latter half of 35-lap feature race but earlier he certainly played the patience game, not making it into the top three until lap 11.

Hitting the lead on lap 20, Sweet tried to open up a lead ahead of Veal; however, Veal was stalking him and on lap 29, Veal hit the lead and that’s where he stayed until the money lap when Sweet returned serve in turns one and two and registering his eleventh Valvoline Raceway win.

Veal crossed the line in second for his second consecutive second place finish and looked a lot stronger than on Boxing Night which spells good news for him heading into Monday night’s NSW Sprintcar Title.

Home in third was early race leader Carson Macedo. Leading the first seven laps, Macedo dropped back to second before falling back to third on lap 15, however was always looking strong and in contention for the win.

Marcus Dumesny continues to show great consistency and maturity with a fine fourth place finish and by virtue of that, continues his lead in the season-long Ultimate Sprintcar Championship, while Robbie Farr raced hard from his ninth-place starting position to come home in fifth.

Aaron Reutzel put on a great display after being sent to the rear of the field on lap eleven for spinning the car and bringing on the yellow lights, to race back through the field to record a sixth-place finish ahead of Alex Orr, Grant Tunks, Lynton Jeffrey and Ian Madsen rounding out the top ten.

Earlier in the night, qualifying proved a challenge with a number of drivers crashing out of contention including Thomas Jeffrey, James Duckworth and Andy Caruana. The drivers who set quick time in their flight included Reutzel, Walsh, Farr and Marcus Dumesny, whilst heat-race wins went to Reutzel, Veal, Macedo and Marcus Dumesny, who all scored points in the Quick Time Titanium Heat Race Championship.

The B-Main was a win for Stewart ahead of Little, Delamont and Madsen.

The next event for the Sprintcar Association of NSW is tomorrow night, Monday, December 30 for the 61st NSW Sprintcar Title. It promises to be a great event with a very talented field ready to take on the challenge.