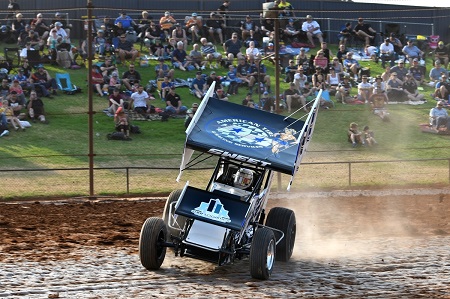 In what has been talked about as the feature race of the season, Californian Brad Sweet has taken out the 2019 Valvoline Australian Sprintcar Grand Prix on Boxing Night for the third time in six years and making it the first American to win the event since he did back in 2015.

Apart from Sweet looking very dangerous at this early stage of the Speedweek series, it was the battle for the top spots between himself, Sam Walsh, Carson Macedo and eventual runner-up and third placed Jamie Veal and Marcus Dumesny respectively that will be long spoken about.

And to just show how intense the battle was up front, there were six lead changes that were recorded by going across the timing loop and many, many more throughout the race, all of which was a fitting result for the 40th edition of the AGP, a race which is rich in history and tradition.

Basing himself in Sydney for the Speedweek series, Veal looked threatening all race and was involved in quite possibly the most intense heat race of the season with Valvoline Raceway debutant, Texan Aaron Reutzel who is the reigning All Stars Circuit of Champions winner for 2019. Veal came out on top, to the thrill of the big crowd on hand.

Marcus Dumesny continues to play the consistency card, recording a third-place finish and continuing to open his lead for the Ultimate Sprintcar Championship NSW, albeit inch by inch, but he is already emerging as one of the favourites to take out the end of season championship.

Rounding out the top five was last-start winner Macedo who was looming in the background all race and having one of his best seasons in recent memory, Ben Atkinson finished on the tail of Macedo.

Walsh struggled in the closing laps to register a sixth-place finish ahead of Jordyn Brazier, Michael Stewart, Robbie Farr who had to come via the B-Main and Ian Madsen rounded out the top-10.

Earlier in the night Sweet, Saller, Farr and Reutzel were all quick time in their flights while Sweet, Walsh, Marcus Dumesny and Veal all scored wins in the Quick Time Titanium Heat Race Championship.

The C-Main went to Coby Elliott ahead of Matt Geering, Jimmy Matchett and USA sensation McKenna Haase, while the B-Main was taken out by Cross, Farr, Ferguson and Wright.

So that concluded the opening night of the Sydney Speedweek for the SANSW with round two set down for tonight at Valvoline Raceway.