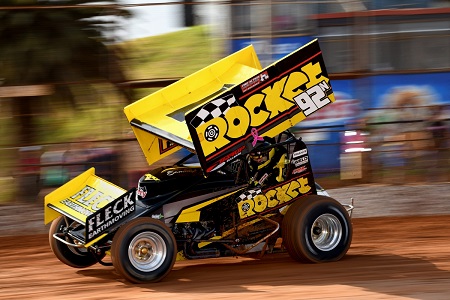 It was a powerful statement from Walsh, with only one show remaining before the highly-anticipated Ultimate Sydney Speedweek kicks off on Boxing Day, and with his 12th victory, now equals the great Steve Brazier on the all-time win list at the venue.

By virtue of his win the Pole Shuffle, Walsh started the feature race on pole with youngster Daniel Cassidy on the outside of the front row, followed by Jeremy Cross, Robbie Farr, James Thompson and Marcus Dumesny completed the top six in the field.

The first stoppage occurred on lap three when Brett Sullivan spun, whilst on the ensuing restart, James Duckworth took a wild flip down the back straight. Duckworth emerged from the crashed car unhurt.

Once the race settled into a rhythm, the battle was well and truly on for the minor positions as Farr, Marcus Dumesny, Alex Orr, Thompson, Cross and Matt Dumesny, who started from position 14, making his charge towards the front, in what has been regarded as one of the best feature races in recent times.

The final stoppage occurred on lap 24 when Matt Geering spun in turn three which bunched up the field and bringing Walsh back to the field. There was heartbreak for Orr, who was well and truly looking dangerous enough to take the win, after engine dramas ended his race and this once again gave Walsh the advantage all the way to the fall of the chequered flag and his first win the 2019-20 season.

Hard charger Matt Dumesny crossed the line in second, whilst Farr was in hot pursuit for third and for the third time from the four USC NSW rounds held, Marcus Dumesny finished fourth while Ben Atkinson rounded out the top-five.

Earlier in the night, four qualifying groups were run with Cross, Farr, Jordyn Brazier and Matt Geering all setting quick time in their respective groups while the four heat race victories went to Cross, Farr, Walsh and Cassidy.

The C-Main saw Luke Geering take the win and Luke Stirton was victorious in the B-Main.

The Sprintcar Association of NSW will take a week off before returning to Valvoline Raceway on December 14 for the Hi-Tec Oils Ultimate Speedway Challenge in what will be the final hit-out before the Christmas / New Year internationals.