MATT MAKES IT FIVE IN THE CHALLENGE 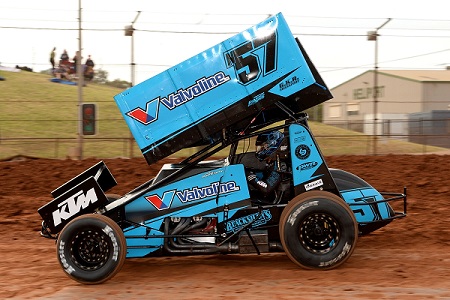 Starting the 30-lap feature race from the second row, he took the lead on the eighth lap of the race and never looked back to record a great win and making it three different winners from the opening three USC events this season.

Second to the line was Jordyn Brazier, who improved on his fourth-place finish at the last USC event a fortnight ago, remains in the hunt in the early stages of the USC NSW point score, after a very competitive showing, which included leading a handful of laps towards the beginning of the race.

It’s fair to say Jessie Attard was an excitement machine during the 30-lap feature race. Beginning the race from position 16, Attard was rarely off the top of the track as he sliced his way through the field, and recorded his second podium finish at Valvoline Raceway.

Rounding out the top five was Marcus Dumesny who now leads the Ultimate Speedway Challenge points chase and front-row starter Troy Little who led early before slipping back slightly, recording a fifth-place finish.

Daniel Cassidy, an impressive Grant Tunks, feature race hard charger Michael Saller, Ben Atkinson and Warren Ferguson rounded out the top-10. For Ferguson especially, it was pleasing to see him in a competitive finish after a luckless opening two rounds.

It was a spectacular exit for Farr and Scheuerle as both flipped wildly out of contention in turn one. Thankfully both drivers were unhurt, despite extensive damage.

The B-Main went to Sayre ahead of Saller, Jeffrey and Orr. The race was marred by a spectacular crash, involving Kris Johnson and rookie Coby Elliott. Johnson was treated on the track by medical staff before being released a short time later. Johnson will have x-rays during the week to determine any injury and the SANSW wishes him a speedy recovery.

The next event for the SANSW is in two weeks for Ultimate Pink Night at Valvoline Raceway on Saturday, November 30.