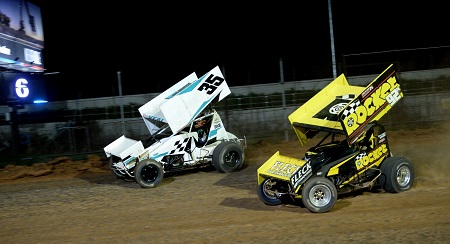 Photo: Gary Reid
Victorian Jamie Veal stood atop the podium after a thrilling victory in the opening round of the Ultimate Sprintcar Championship NSW and the Hi-Tec Oils ultimate Speedway Challenge at Valvoline Raceway on Saturday night.

Veal, who has won the track championship season opener now five times in the last six years, withstood all that was thrown at him. and heavy lapped traffic, to record his 18th Sydney A-Main win, in a come-from-behind effort.

The 25-lap race began with Jessie Attard and Sam Walsh on the front row, with Attard immediately jumping into the lead. An early race caution bunched the field back up and, on the restart, Attard got sideways, allowing Walsh to hit the lead. That was short-lived however, after Walsh made an uncharacteristic mistake, allowing Veal through to the lead.

All of the action was going on behind him though, with Robbie Farr on the move after starting deep in the field, Lachlan McHugh was looking threatening and Marcus Dumesny was always in contention throughout the entire race distance.

With 6 laps remaining, it all came unstuck unfortunately for Attard, looping in turn four. This set up a great final portion of the race with Veal leading from Walsh, McHugh, Farr, Marcus Dumesny and Max Dumesny.

In the closing laps, McHugh withdrew with mechanical issues and despite throwing everything at Veal, Walsh had to settle for second while Veal recorded yet another great win in Sydney. Third to the line was Robbie Farr, ahead of Marcus Dumesny, Max Dumesny, Daniel Sayre, Alex Orr, current Australian champion Andrew Scheuerle, Mick Saller and Jordyn Brazier rounded out the top ten.

The B-Main saw Stewart grab the win ahead of Cassidy, Delamont and Geering.

The next event on the SANSW calendar is this Saturday night, October 26 for the next non-points old school nights.