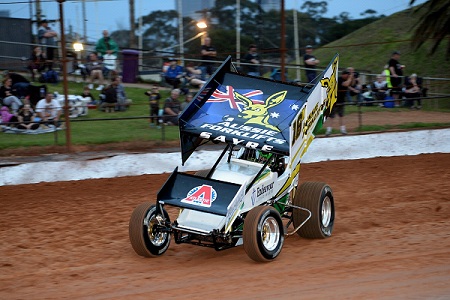 Daniel Sayre began his 2019-20 season campaign in the best possible fashion with an emphatic come from behind victory in the Lord Mayor’s Cup at Valvoline Raceway on Saturday night.

Starting the 30-lap feature race from position 16, Sayre immediately began moving forward and making an impact and such was the pace from Sayre, he moved into the top five after just five laps. He wasn’t alone, as Alex Orr cut a similar path through the field and into the lead early.

Taking the initial lead was polesitter James Duckworth, closely followed by Brett Sullivan before the latter took the lead for a brief time before crashing out in the opening laps. That gave the lead back to Duckworth for a short time before it was Orr’s turn to top the lap charts.

With nine laps remaining, Sayre swept past Orr and was unchallenged for the remaining distance. While Orr crossed the line in second, it was a very impressive podium finish for Matt Geering. Starting mid-pack, Geering consistently made his was forward and spent the majority of the second half of the race in the final podium placing.

It was a great advertisement for the youngsters coming through the ranks of the Sprintcar Association of NSW and it can only mean good things as the season kicks into another gear come October.

Completing the top five was Michael Stewart and Victorian Ryan Davis. They were followed by Jeremy Cross in seventh, James Thompson, a very impressive debut performance by Lachlan Caunt, Jessie Attard who came from the rear after losing his nose wing in the early laps and Duckworth was tenth.

Earlier in the night there were fur heat races contested, with wins going to Attard, Davis, Stewart and Sullivan. With rain approaching, officials made the decision to cancel the second round of heats and go straight to the feature race.