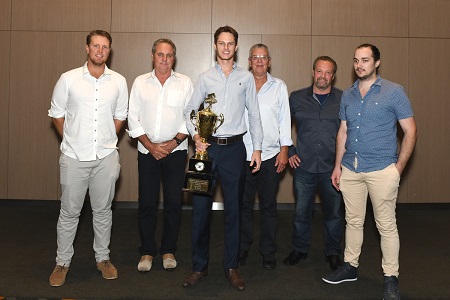 The Sprintcar Association of NSW held its end of season presentation dinner on Sunday, at the western Sydney-based St Marys Leagues Club, and it was there that Sam Walsh was officially celebrated at the 2018-19 Ultimate Sprintcar Championship NSW champion.

Around 120 guests were present to celebrate and it as a great way to cap the 2018-19 season which once again featured some great racing, plenty of up and coming talent and the tightest finish to a season, with just two points separating Walsh and second-placed Robbie Farr.

The award for most improved started proceedings and that was awarded to Luke Stirton. With a career-best feature-race finish of fifth earlier in the season, and an overall performance improvement, it was certainly a well-deserved award.

The Rookie of the year award was presented to Michael Stewart. Making the step into Sprintcars this season, Stewart has garnered some competitive results through the season and will no doubt look to aim even higher in his second full season.

James Duckworth was the recipient of the Rising Star Award and although having some meetings plagued with engine dramas early in the season, Duckworth has shown plenty of potential as one to keep an eye on in coming years.

The Sportsman award, presented by the Speedway Pushcar Association each year, was awarded to Dick Thompson. As car owner for his grandson, Will, and Jeff Lawler, Dick’s dedication to Sprintcar racing should be commended and was a well-deserved award, while the ultra-professional Saller Racing took home the Team of the Year

Other awards presented included Club Member of the Year: Bob Thompson, Official of the Year: Tony Anderson, Jackson Delamont took home the Scott Darley Hard Charger Award, Frank Scandolera was presented with the prestigious Presidents Award, while Lance Wilson was recognised for his contribution to Speedway and Sprintcar racing be being presented with the George Tatnell Medal.

The club would also like to thank the volunteers throughout the season:
- Kristy-Lee Bell
- Donieta Bell
- Karen Muir
- Teearn Summers
- Cassandra Piper

A special mention of thanks also to Brian Van De Wakker for doing a great job as emcee and Paige Loadsman for being trophy girl on the night. That now wraps up the 2018-19 season with the schedule for the 2019-20 season to be released in coming weeks.