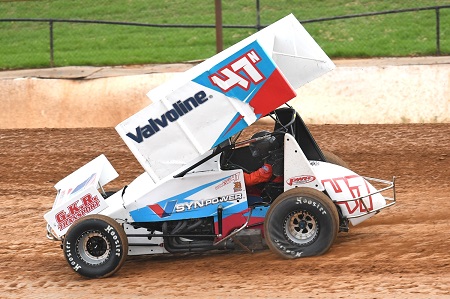 Photo: Gary Reid
Without a doubt, it’s been a breakout-season for Marcus Dumesny and for the third time this season, he has raced to a feature-race victory. Last night it was the Ultimate Speedway Challenge that saw Marcus grab the win.

In a race that was reduced to 20 laps due to time constraints, Marcus led every lap to score maximum points in what was the third-last round of the Ultimate Sprintcar Championship, as the season reaches an exciting climax.

Quick time in his group for qualifying and a heat-race win secured a front-row start for Marcus Dumesny with current USC NSW points leader Sam Walsh alongside and as the green flag fell, Marcus immediately hit the lead, setting up an advantage over the rest of the field.

As the race progressed, battles were raging through the field before the first caution of the race appeared for Troy Little who came to a stop on turn three. On the restart, it was Marcus Dumesny from Sam Walsh in second and Robbie Farr in third. A second caution a number of laps later bunched the field again.

On the ensuing restart, Matt Dumesny rode out a wild flip. Although the car was extensively damaged, Matt Dumesny emerged from the car sore but ok. Damage also ended the race for Jeremy Cross and Daniel Sayre.

With time becoming a factor, there was a real sense of urgency to make the most of what was the final restart. For Farr, he was swamped going down the back straight and shuffled back as Jessie Attard, who started mid-pack and was on a real charge powered his way to the top three.

As the final laps played out, Farr managed to claw back to fourth, just behind the top three of Marcus Dumesny, Sam Walsh and Jessie Attard who scored his first podium finish at his home track. Rounding out the top five was Danny Reidy followed by Max Dumesny, Michael Stewart, Mick Saller, Jordyn Brazier and Jackson Delamont.

The season now reaches the final stages with, as mentioned, only two more-point scoring rounds of the USC remaining.

The next event is a non-point night on Saturday night, March 16 followed be the penultimate USC Round on Saturday, March 23.