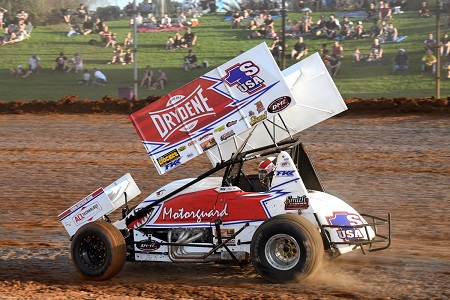 Photo: Gary Reid
The 2019 Scott Darley Challenge, which was also the final time the event would be run, produced a bit of everything including rain, great racing and a controversial finish that saw World of Outlaws star Logan Schuchart disqualified and then reinstated on appeal after not going directly to the infield scales.

It was a career-first win at Valvoline Raceway for Schuchart, driving for Queensland car owner John Weatherall, and he used every ounce of his vast World of Outlaws experience to keep Ian Madsen and fellow countryman Cory Eliason at bay.

The event, which was reduced to a one-day format after torrential rain washed out Friday night prior to qualifying, was bathed in sunshine on the Saturday night and giving competitors a completely different race track.

The 38-lap feature race saw Eliason and Ian Madsen share the front row ahead of Marcus Dumesny, Lynton Jeffrey, Schuchart, Parker Price-Miller, Max Johnston and Matt Dumesny. By virtue of winning the Pole Shuffle, Jamie Veal elected to take the Challenge which would relegate him back to position 19 and would earn $1000 for each car passed.

At the drop of the green flag, Eliason leapt into the lead early with Ian Madsen, Marcus Dumesny and Schuchart in hot pursuit. On lap three, Ian Madsen made his move on Eliason and took the lead and it was around this time that Kerry Madsen began to make his presence felt and Schuchart moved into the top three.

By virtue of running off the track, Ian Madsen lost the lead back to Eliason, albeit temporarily before Schuchart made his move on lap 21. By this stage, it looked like the event was going to run non-stop; however, with 11 laps remaining, Robbie Farr spun on turn two and that condensed the field for the final sprint home.

On the restart Kerry Madsen powered through to position two, Eliason was third and Ian Madsen did not benefit from the restart, falling back to fourth. This put him on a mission and as the laps closed in on the finish, there was a great battle between Ian Madsen and Elaison and with two laps to go both Ian Madsen and Eliason passed Kerry Madsen and that in turn gave Matt Dumesny a chance to snare a spot just outside the podium.

The C-Main went to Matt Geering from Warren Ferguson, Jason Pryde and Daniel Sayre. The B-Main saw Walsh get the win ahead of Delamont, Atkinson and Cassidy.

Valvoline Raceway made a special announcement on the night with the unveiling of the Ultimate Speedway Nationals to be held on January 10 and 11, 2020 which will replace the Scott Darley Challenge. More news on this exciting event will be available shortly.

The Sprintcar Association takes a break from racing now with the Grand Annual Sprintcar Classic and Australian Championship to play out. The next event for the SANSW will be Saturday, February 9 at Valvoline Raceway.