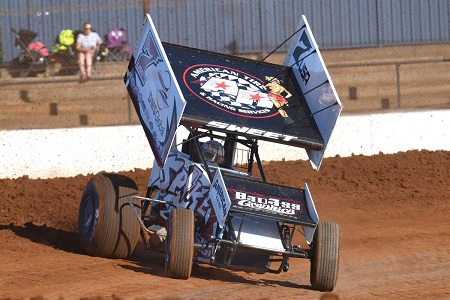 Photo: Gary Reid
Brad Sweet used all of his experience and knowledge of slick tracks to race away to claim the Firecracker 50 Lapper last night at Valvoline Raceway and thus winding down what has been a successful International season at the venue for the Sprintcar Association of NSW.

Sharing the front row with pole-sitter Alex Orr, Sweet raced into the lead and began to set a pace that he was comfortable with, given the dry, slick track surface while behind him, Orr, Max Johnston and Matt Dumesny battled early.

Whilst running in position two, Orr looped the number 43 car, bringing on the caution light. By that time Robbie Farr was up to second, Matt Dumesny was in third and Sam Walsh was fourth in what has been the case almost all season with those three drivers locked together.

On lap 11, Matt Dumesny advanced to second from position four and then suddenly was making good inroads on Sweet’s lead. Just three laps shy of the competition caution, Dumesny slid under Sweet for the lead and the battle was well and truly on.

As the yellows came out for the halfway stoppage, it was Matt Dumesny ahead of Sweet, Lynton Jeffrey who was on a charge again, Farr, Marcus Dumesny and Troy Little and as the restart went green, Matt Dumesny continued to hold sway over Sweet, albeit temporarily as on lap 33, Sweet made a pass for the lead and got through as the track started to rubber up.

One of the fastest cars out on the track was Jeffrey and that showed as he passed Matt Dumesny for the runner-up position and holding off any further challenges. With five laps to go, Marcus Dumesny moved to fourth, passing Farr and despite going heard after his brother had to settle for finishing just outside the top three.

Earlier qualifying action saw Johnston set quick time in flight one with a 12.792 second lap and Michael Saller was quickest in flight two with a 12.495 second lap.

The B-Main was won by Brazier ahead of Max Dumesny, Delamont and Wright who had returned home to Muswellbrook to build a new car after destroying a car two nights earlier.

The next event for the SANSW will be the final Scott Darley Challenge on January 11 and 12.