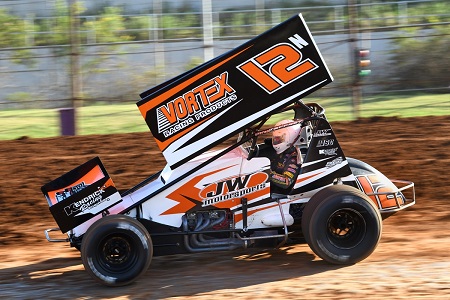 Photo: Gary Reid
The 61st NSW Title saw an epic come from behind win as Lynton Jeffrey swept past Brad Sweet to claim his maiden title victory with a last lap pass that had the crowd on their feet in what was a great display of Sprintcar racing.

At the beginning of the 35-lap title-decider, It was Matt Dumesny from the second row who hit the lead early before Sweet grabbed the lead on lap three and as the race began to take shape, Sweet used the lapped traffic to his advantage and opened a healthy gap.

The battle was raging between Matt Dumesny, Jordyn Brazier, Farr and Jeffrey lap after lap behind Sweet as they all looked for the advantage before a caution bunched the field up. At the restart, Sweet took the lead again as Jeffrey began to make his presence felt.

Sadly for Brazier, he spun out of contention which allowed Jeffrey to advance again and begin to make inroads into Sweet’s lead. With just a handful of laps remaining, Jeffrey was on Sweet’s tail and Farr and Walsh were battling hard for third.

On the final lap, Jeffrey made a sweeping pass around Sweet to register his first feature-race win at Valvoline Raceway. Sweet had to settle for second ahead of Farr, Walsh and Matt Dumesny rounding out the top five.

The B-Main was taken out by Delamont from Scorgie, Saller and Skipper. Unfortunately for Marcus Dumesny, he crossed the line in a transfer position but was disqualified for not going to scales. The C-Main went to Peter O’Neill ahead of Ayden Elliott, Kris Johnson and Brendan Rallings.

The final Christmas-New Year event is this Tuesday night for the new year Firecracker 50 Lapper, then all eyes turn to the final Scott Darley Challenge to be held on Friday and Saturday, January 11 and 12 at Valvoline Raceway.