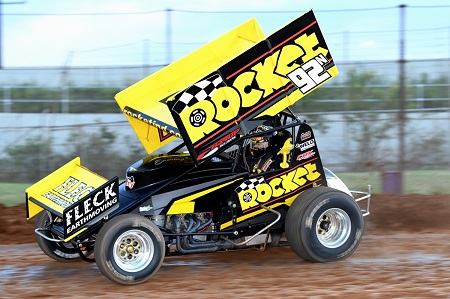 Photo: Gary Reid
Sam Walsh convincingly won the All Open Wheel Deal at Valvoline Raceway and in the process, notched up his first feature-race win of season 2018-19 and also extended his lead in the USC NSW point score. The night will also be remembered for the alphabet RUN BY Brad Sweet from the C-Main.

Taking the lead from early race leader Lynton Jeffrey on lap seven, Walsh withstood plenty of challenges throughout the event but managed ease away as the race entered the closing stages to take the win.

Second to the line was Matt Dumesny, repeating his efforts as runner-up on Boxing Day. Matt was involved in a very spirited challenge with younger brother Marcus throughout the race, but during a late-race restart, secured second spot and stayed there till the drop of the chequered flag.

Filling the final podium spot was Robbie Farr who was once again an ever-present threat through the race. Falling to as low as sixth in the final 10 laps of the race, Farr was measured in his move forward, cementing second place in the USC NSW point score behind Walsh.

Fourth home was Marcus Dumesny, and just like his efforts on Boxing Day, was on a charge for the entire race distance as he continues his impressive season to date.

Completing the top five was American Brad Sweet, and what a story it was for him. Missing qualifying earlier in the night, along with his heat race, Sweet was forced to start at the rear of the C-Main. Making the transfer from the C-Main to the B-Main, he managed to just transfer to the feature race, coming from sixth to fourth on the final lap. That meant he started 24th in the feature race and moved his way to fifth in what was one of the best drives witnessed.

Qualifying kicked off proceedings and it was Farr who set quick time in flight one with a 12.136 second lap while Matt Dumesny set a 12.465 second lap in flight two to head the list. Heat race wins went to Farr, Jeffrey, Matt Dumesny and Walsh.

The C-Main was won by Ben Atkinson from Shane Sheedy, Sweet and Bruce White while the B-Main was taken out by Scorgie from Reidy, Stewart and Sweet.

The next event is the most prestigious on the SANSW calendar – the 61st running of the NSW Title tomorrow night, December 30 at Valvoline Raceway.