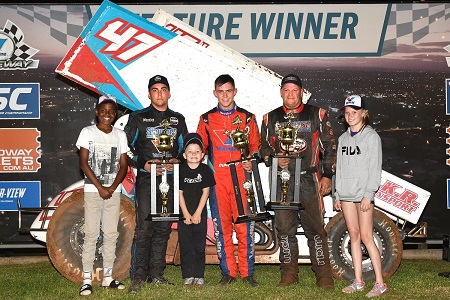 Photo: Gary Reid
It was a big night for the Dumesny family at Valvoline Raceway with Marcus not only writing himself into the history books as a winner of the prestigious Valvoline Australian Sprintcar Grand Prix, but also going on to record his first ever Sprintcar feature-race win at the venue.

Having to work for the win, Marcus came from the third row in the field and had an intense battle with older brother Matt for the lead in the closing stages, after passing early race leader Robbie Farr, to record a popular victory.

The feature race started with Pole Shuffle victor Troy Little leading the opening exchanges before Robbie Farr assumed the top spot and held form for the next twenty laps. During this time, Marcus and Matt Dumesny began to make their presence felt, along with Alex Orr who has been very impressive of late.

The race, which was peppered with stoppages never really got into a rhythm which in turn pushed the intensity level up with restart after restart and on lap 23, Matt Dumesny made a dive for the lead and the current NSW Champion set sail, opening a handy lead, with Marcus making his move for second and on the hunt after his brother.

In the meantime, Little and Danny Reidy were having their own battle for positions just outside the top three, while Alex Orr succumbed to a mechanical issue, deflating his chances for a third podium finish in-a-row.

With time becoming a factor, it became a frantic race to the finish with Marcus sweeping around the outside for the win, defeating Matt Dumesny, Farr, Reidy and Little rounding out the top five.

Earlier in the night, qualifying saw Farr set quick time in flight 1 with an 11.934 second lap and Walsh was quickest in flight two with a 12.115 second lap. Heat race wins went to Farr, Little, Walsh and Matt Dumesny.

As mentioned, the Pole Shuffle was claimed by Little, the C-Main saw Matt Thomas grab the win before sadly flipping wildly out of the B-Main and Michael Stewart took the win in the B-Main.

The Sprintcar Association of NSW is back in action tomorrow night, December 28, at Valvoline Raceway for the Harbour City Open Wheel event.