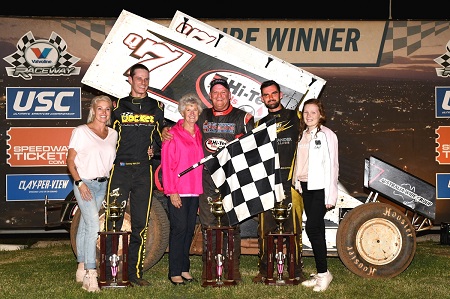 Photo: Gary Reid
It was a feature race for the ages last night at Valvoline Raceway as Robbie Farr stormed to victory in the George Tatnell Challenge, although with five laps remaining, it would have been anyone’s guess as to who would take the win as Farr, Sam Walsh and Alex Orr swapped positions multiple times.

With Walsh and Farr on the front row, it was initially Walsh who took the lead and lead the opening four circuits before Farr became the front runner and appearing to check out on the rest of the field, until getting out of shape on the testing cushion, allowing Walsh back into the lead.

During this time, Alex Orr, who was running on the highline, was making ground on the front-running two and looming as a real threat for the win. A restart with 10 laps remaining set the scene for what has become one of the most intense finishes to a Sprintcar feature race, as all three swapped positions. At the fall of the chequered flag though, it was Farr who recorded his second Sydney win of the season ahead of Walsh and Orr.

Despite all of the action up front, the racing for fourth and beyond was just as entertaining with Dubbo, NSW-based Jeremy Cross staying in contention all race to record a fine fourth place and rounding out the top five was Grant Tunks who put the disappointment of missing out on a feature race transfer a fortnight ago behind him to finish strongly.

Just outside the top five was comeback racer James Thompson who has been sidelined since the start of the season due to some health issues, followed by the three consistent drivers so far this season: Daniel Sayre, Warren Ferguson and Jackson Delamont and rounding out the top-10 was Daniel Cassidy who qualified a career best position three for the feature race.

Next across the line was Danny Reidy followed by Marcus Dumesny (from the B-Main), Ben Atkinson who was looking to be in good contention until a mid-race spin, Peter Bourke, Max Johnston, Jessie Attard, Brendan Scorgie, Ben Atkinson Jr and making his first Sprintcar feature-race debut - Ayden Elliott.

Earlier in the night, four frantic heat races were run. Wins went to Matt Dumesny, Farr, Walsh and Cassidy. There were some spectacular moments in the heats, none more so than Kyle Angel’s spectacular flip in the opening heat race. Thankfully the talented race emerged A-OK.

The B-Main was a torrid affair which was won by Marcus Dumesny ahead of Attard, Wright and Elliott.

The next event for the Sprintcar Association of NSW will be Boxing Day at Valvoline Raceway for the 39th running of the prestigious Valvoline Australian Sprintcar Grand Prix. This event is considered one of the blue-ribbon events on the NSW calendar and will be a hotly contested race. 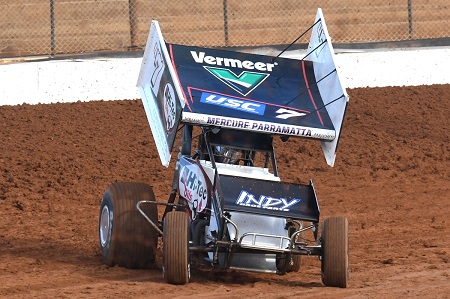