Farr Too Good In The Sid Hopping Shootout 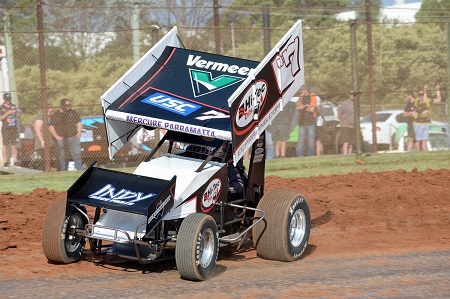 Farr started on pole after what was a pretty faultless evening, going second quick in his flight and winning his heat which set him up for the pole shuffle, guaranteeing himself a front row start in the 30 lap final. From there, Farr led the entire race distance to record his 46th win at the venue.

Coming home in second place was Troy Little who, like Farr, had a great night in what was his final meeting before jetting off to New Zealand to race. Little shadowed Farr for the entire race and did a great job to record his first podium finish of the season.

Completing the podium was Central Coast-based racer Alex Orr and in doing so, recorded his career-best finish in a Sprintcar at Valvoline Raceway. Orr was on the pace from the outset and despite not being able to advance from his third place, it was a massive confidence boost as the entire team head into the busy portion of the season.

Completing the top five was Matt Dumesny and Jessie Attard. In what was an entertaining race between the two young combatants, the result was in the balance until almost the drop of the chequered flag. For both drivers, it was vital points scored in the USC NSW point score.

Jordyn Brazier, Sam Walsh, Marcus Dumesny, Jackson Delamont and Warren Ferguson completed the top ten. It was an impressive return to the track for Marcus Dumeny after his big crash a fortnight earlier and for Ferguson, he was once again one of the big movers coming from position 13 in the B-Main.

Just outside the top-10 saw Danny Reidy, Grant Anderson, Ben Atkinson and Max Johnston who came from the second last row of the C-Main to finish 14th in the feature race was another outstanding effort.

Earlier in the night it was Troy Little (Flight one) and Garry Brazier (Flight two) who set quick time. Heat race wins went to Little, Orr, Dumesny and Farr.

The C-Main was won by Peter Bourke and Geering won the B-Main.

The season is now starting to ramp up for the SANSW with next week seeing the final Development Sprintcar event being run followed by the George Tatnell Challenge/Ultimate Pink Night on December 8 and the 39th running of the Australian Sprintcar Grand Prix on Boxing Night.